In spite of an unexpected power outage halfway through, we had a great time at our mixer last night! In case you couldn’t make it, here’s a look at some of the data we dug up about the Foster Area Business District.

There are 228 businesses in the Foster Area, providing some 1,668 jobs. The largest providers of those jobs are retail businesses (475 jobs) and food & drink businesses (306 jobs). 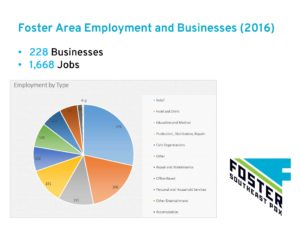 Let’s take a look at that with a little historical context. In 2002 Foster had 171 businesses. By 2007 we were down to 166. Since then we’ve recovered and then some! That growth has resulted in 19 new food and drink businesses, 14 new office-based businesses and 8 new civic organizations (all changes are net). 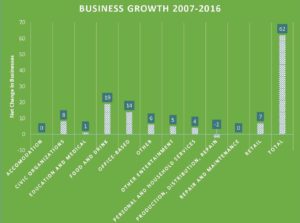 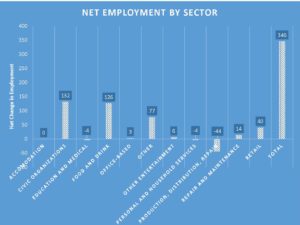 Who is Visiting Your Business?

Most people spend most of their money either where they live or where they work. So let’s take a look at the sort of disposable income your average person on Foster Road is likely to have.

The per capita income of residents of the Foster Area Business District was $24,221 in 2016. That’s roughly the 25th percentile for Portland business districts.

But wait! Let’s parse that a little. When you take a look at household income, Foster is actually right in the middle for Portland business districts with a median of $52,296.

That means we have slightly larger household sizes than average. We already know that Foster is a great place for growing families and it looks like a lot of others agree.

What Does the Future Hold?

We all know that Foster is on the verge of some major changes with the streetscape development this summer, and we’re already starting to see some of those effects. For example, look at all this housing coming in:

NB: those numbers are from permits, so we won’t see those 106 units of housing approved in 2017 enter the market for another year or two.

But that hasn’t stopped price speculation pushing up commercial lease rates, especially in retail. That $6/square foot in 2007 shot all the way up to $21 in 2017. As they say, the best time to buy property is 10 years ago. Here’s hoping some of that growing supply helps keep prices reasonable for existing residents and businesses. 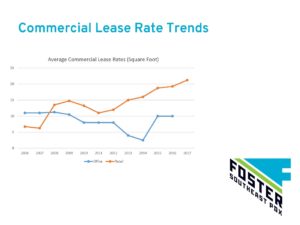 You’re probably wondering where we got all that data. You can check it out yourself with this handy new tool released by the Bureau of Planning and Sustainability here. You will also find information about data sources, methods and a whole lot more for those of you that love digging around in public data sets. Have fun!